General Practice, Solo and Small Firm Section of the State Bar of Texas

e-Filing: The $148.820 Million Sinking (and Sinking and Sinking) Fund
If you have filed any pleading in a civil case you may have been stung procedurally or you may have skated. But even if you have skated, you've heard the complaints about efiling under the e-filing system:
- There is a lack of uniformity.
- The rules are confusing.
- Filings are refused for the looniest reasons.
- The time lag in response for acceptance or rejection is unacceptable.
- The time lag creates venue conflicts.
- The lack of predictability injures attorneys' reputations and client confidence.

These and other failings of the efiling system have numerous short-term or "efficient" causes, but they all stem from two major blunders: the system is mandatory and the system is improperly aimed at electronic filing rather than electronic storage.

Electronic filing started in 2000 with Texas Online, a system originally run by Bearing Point (an information management off-shoot of KPMG) through an agreement with the Texas Department of Information Resources (the "DIR"). Bearing Point declared bankruptcy in 2009 and the contract was picked up by NIC-USA, a company that, like the current provider, caters to government bureaucracies. The original Texas Online system went live in Fort Bend in 2003 and incrementally expanded until 2012. In 2011 NIC notified DIR that it would not renew the contract in 2012.

Texas Online had its issues, but over the course of the intervening time, it was molded into a reasonably adept portal for electronic court filing. Much more importantly it facilitated or impelled some counties to integrate the e-filing system with the significantly more important function of digital storage and retrieval of court documents. For example, Dallas County had almost fully migrated to full digital storage and management by 2008 and by 2010, public access to full document views was available online. Counties that did efiling implemented a variety of document storage systems, some of which were very robust and according to their curators superior to the current system. Other counties are not that efficient; some charge a subscription fee for "public access."

The Texas Online system worked reasonably well because it was voluntary to the filer, flexible and adaptable to changing circumstances and grew as the county systems that used it for filing, adapted it to the larger and significantly more important goal of digital storage and had the flexibility and developing expertise to seek the best document management systems. It catered to the legitimate convenience of litigants and the legal community for speed and efficiency in filing. That which worked, worked well. That which didn't work could be ignored, finessed, fixed or replaced. Most importantly, the point of the initial system was not lost in some grandiosity. It was for convenience in filing, storage and retrieval, not the reshaping of filing into a fragile, "mandatory" system.

That all changed as of 2014. The Supreme Court's stated goal was to promote "the efficient and uniform administration of justice. In the 21st century, we no longer can rely on an 18th or 19th century vision for our systems. E-filing will revolutionize our courts for the better." This flowery language cannot mask the lack of sophisticated and appropriately targeted thought which failed to make its way into the new "efileTexas.gov" system. The loss of coherence and efficiency is after six years still evident. E-filing will not revolutionize the courts, but digital storage will and should make them more efficient and available. The emphasis should always have been on digital storage and management. The concentration on efiling -- that is, the methodologies of sending a document to a clerk -- is obviously secondary and a blunder. Moreover, the stated goal is internally contradictory because not all litigants are required to e-file, thus sustaining what the Supreme Court claims is unsustainable.

The loss of focus on a legitimate purpose has had a predictably bureaucratic outcome. With the loss of the DIR-NIC contract, the Supreme Court sent the issue to its Office of Court Administration instead of the experienced and at least technically competent DIR. The OCA issued an RFP and an outfit named "Tyler Technologies, Inc." got the bid. Tyler is another entity which caters to government bureaucracies -- which Tyler calls by the euphemism "the public sector." (Your biases about an entity that caters to a euphemism for "bureaucracy" may or may not be confirmed by the lack of consistency, completeness or coherence in the current implementation.) It's trademarked document management system is mandated, though at least one prominent District Clerk clearly and publicly labeled his former product as "superior." Those who used that former system in that county would agree.

Among the minor ironies of this mandate are: first, provisions in and amendments to the OCA-Tyler contract, by which, among other things, Tyler indemnifies the courts as well as the OCA (but not lawyers) against any copyright infringement which may occur or have occurred, which includes the right to charge a subscription fee and which emphasizes that the whole system is proprietary to Tyler. Second, note that the original name for the new system had to be changed from "TexFile" to "efileTexas.gov" because of a trademark infringement claim. Third, the apparently-now-abandoned graphic logo for the original TexFile shows the State flaking off. 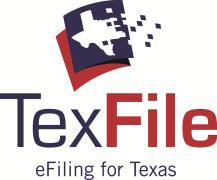 What is neither ironic nor funny is the compensation scheme. By the original contract of 2012 Tyler got paid by the transaction a toll on litigation filings. The toll was capped at just over $72,000,000. It is important to know that the original contract term ended in 2017, and under the scheme, the Texas Court's right to use the system ended unless extended. By Amendment 3 of July 2016, to that contract the term was extended four more years and now has a terminnation date of August 31, 2021 (a bit less than a year from the time this article has been amended). That's when your right and your clients' rights to use the system will cease, unless extended again. The guaranteed cost to you and your clients of the last extension (amended again in September 2018 to raise the price) until 2021 is another $76,820,000.

Tyler, the OCA and Supreme Court originally bragged that Tyler had set up similar systems in mutiple other states. However, one who worked inside the process at the beginning admited it was simply a poor adaptation of something originally implemented in a midwest state. In the intervening years, Tyler Technology has, with apparent Supreme Court approval, extended its reach.

In the intervening six years since the original mandate, various clerks of various courts in various counties have adapted their filing standards and protocols to the eccentricities of the Tyler-OCA "system" with more or less efficiency. Lawyers also and in turn have adapted to the requirements of the venue or venues of the places where they practice. What had been easy, efficient, scalable and in many cases intuitively obvious before 2014 became a six-year obstacle course.

Now (that is, in late September 2020) we have the unsavory spectacle of Tyler Technologies having been hacked, which the company euphemistically refers to as a "security incident." While you are thinking of your clients' online information and your firm's credit card accounts consider two things: first, the OCA's contract with Tyler infemnifies the OCA, not you or your clients; and second, this comment by Tyler: "Based on the evidence available to-date, all indications are that the impact of this incident was directed at our internal corporate network and phone systems. The environment where we host software for our clients is separate and segregated from our internal corporate environment." Ask yourself if you would be willing, if you had the discretion, to trust such an arrangement or such a comment.

Think of what the $148,820,000 might have bought, had the Court not been so cavalier about using lawyers and their clients as beta testers.